Knowing that I had two weeks of holidays, albeit with some day-job work to do at home, I got out some books and supplies to start playing.  I will have a few days of granddaughters staying so the house will be completely given over to creativity as they have a tendency to get going before they even get out of their pyjamas. 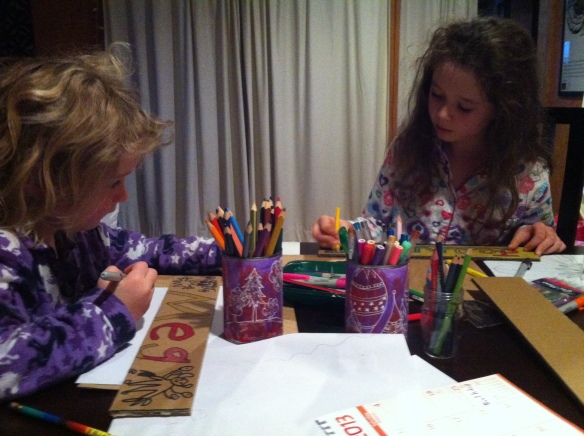 I got out the pile of journals that I used in a rather haphazard way and was really surprised at how many there are . . . and horrors!!   I even found a travelling journal that the wonderful Quinn McDonald had sent me for a contribution before sending on to another journaler in this neck of the woods.  I cannot believe I have been so remiss!  What was going on in my life at that time that I forgot?  I’ll send it on very soon Quinn, I promise! 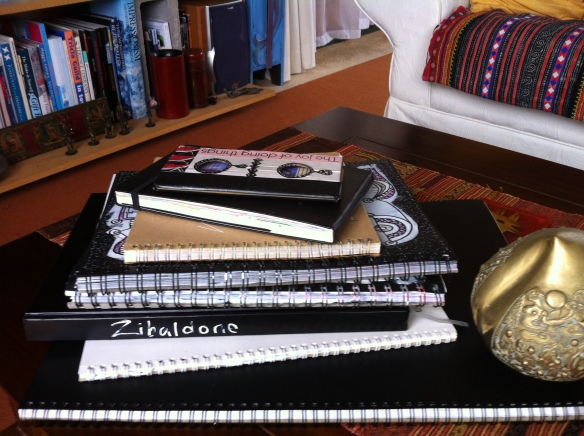 The third from the top has “Draw you mind before it expires” written on it. As I’ve had it for about 4 years without using it much, I thought the time had come to give the message some serious thought!

The one on top is a duct-tape journal I made after watching a video of Diana Trout‘s.  It lives in my bag and has its innards replaced from time to time.  The zibaldone is my commonplace journal, my ‘everything but mostly writing, daily pages’ journal – read this and you would know my innermost thoughts!  It’s a 2002 diary that somehow did not get used and was put in storage while I was overseas.  While I’m thinking of it I should perhaps see if I can pick up a 2013 A4 diary before they get sent off for recycling.

A favourite for now is this visual journal with alternating black and white pages. 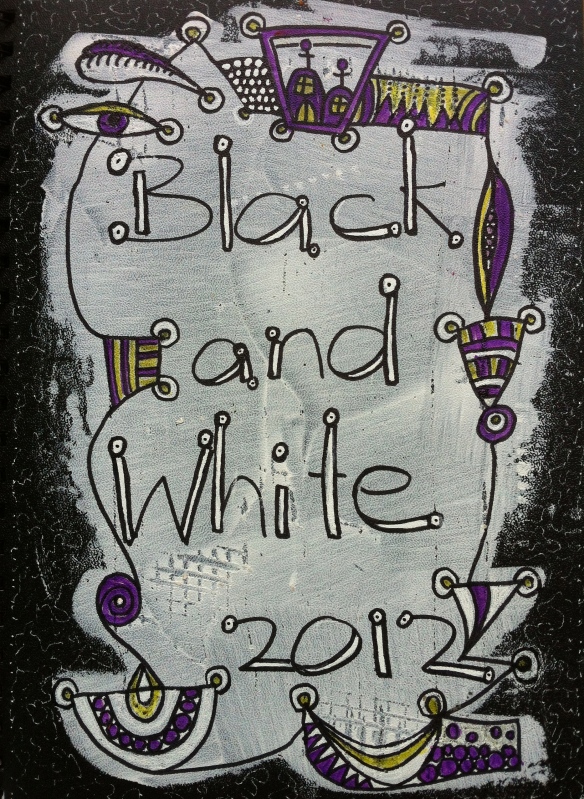 I had been thinking about how vulnerable the heart is, that while we need to guard it well, we also need to let others in.  I have mentioned the TED talk by Brené Brown, The Power of Vulnerability before . . .  do watch it.   I thought that for this serious topic, I’d have a little play with cut outs. 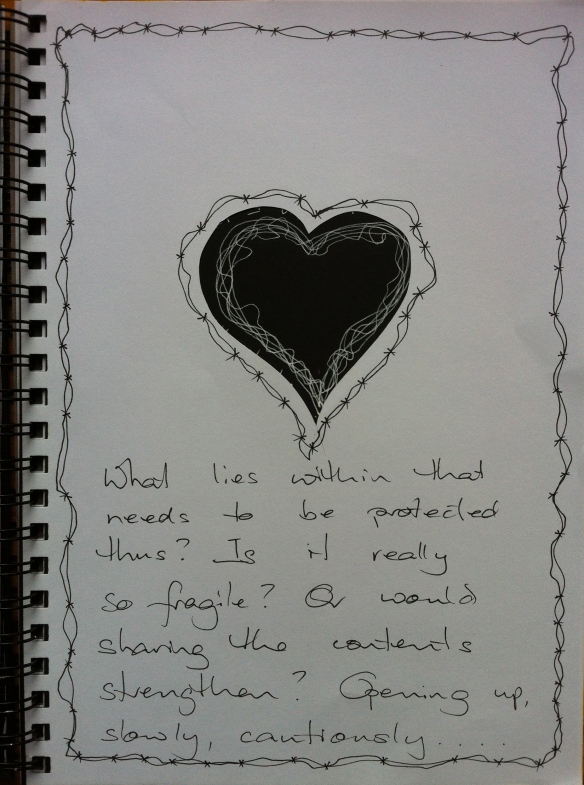 Tomorrow, I’ll try for three posts in a row but no promises with the darlings arriving here this afternoon . . . I could be busy.

On Diana Trout’s blog last Friday I wrote “Today is the last day of the school term, 2 weeks holiday just around the corner (although like most educationalists I’ll have work to do . . . bugger!) and I am determined to pick up AND USE brushed and pens EVERY DAY! YES!!! You heard it here first. And I will POST every day . . . except maybe when the darlings are here. :)”  I missed on the very first day!   It’s not that I didn’t have some playtime, it that by 11:00 pm I didn’t feel like posting anything.     Yes, good intentions, that’s me.

My day started when I was jolted out of a book by a thump on my house . . . I leapt out of bed to find a dead tui on the deck.    These native birds are beautiful, and have a distinctive sound as they chortle, click, whistle and sing in the trees nearby and I was upset to find that one had tried flying though my house instead of over or around.   I guess with big glass doors on both sides . . . this is the third bird and they’re getting bigger and I’m wondering what will be next.  We have big black-backed gulls aplenty, the odd pheasant hiding in the sand dunes.   Just as long as there’s not an albatross blown in by the storm that’s heading this way! 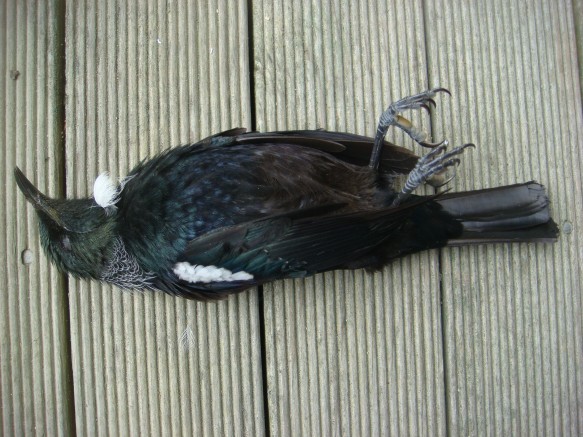 The plumage is beautiful, glossy black, gleaning with blues and greens and that little tuft of white on their throats.   It seemed unreasonable to just bury it in my garden so I rang the Maori language university,  Te Wānanga o Raukawa.  My guess is that some Maori weavers will make use of the feathers – I hope so.

Oh my goodness, two entries in a row where a pointless death is featured so just to let you know that play took over for the rest of the day, here are some backgrounds made with homemade stencils (cut out of acetate).

The trouble is, I get to this point and I’m not sure where to go next . . . I tend to just lay it aside for later and sometimes ‘later’ is a long time away.  For instance, this was a very early background that I just haven’t done anything with . . . yet.

Ah well,  maybe today it’ll speak to me.  I need to loosen up more and not expect to have a final image in my head . . . to just see where it will go if I make some random marks.