The exhibition is on and almost over.  It opened on October the 6th with eight pieces being sold over the first weekend.  Very affirming.  Unfortunately I have done little since although I did have plans.  What’s with that? I know from when I was doing a bit of acting that there would be a bit of down time after the run of the play . . . a time when I felt as if there was a huge gap that couldn’t be filled by anything other than another play.  That’s how I feel now, as if I should be working toward something else but what?  My get up and go seems to have got up and gone for one reason and another . . .

It’s time to get back to work . . . something . . . anything . . . maybe one of the ideas that had excited me while I was doing the tedious work of mounting and framing the work.  I made a few notes at the time but somehow getting myself across the threshold and doing some work just isn’t happening. At least I can do this . . . post a few images of the smaller 10 x 10 cm pieces albeit rather late in the piece as the exhibition, having been up for a month, comes down tomorrow. 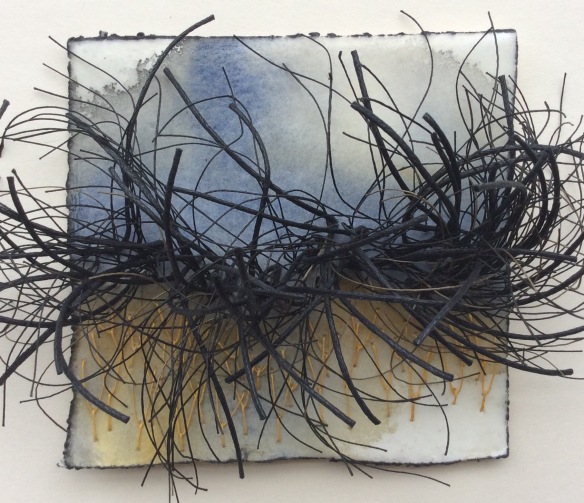 When I bring the work home I’ll take some decent photos of the rest of the work and and post some more, promise.